This is the most common European Standard for testing gloves to be used in general industrial applications. It is also referred to in many of the specialist glove standards, for activities such as welding and handling of chemicals. EN 388 was first published in 1994 and subsequently revised in 2003 and 2016. It includes four main physical tests to assess the resistance of the gloves palm area to mild abrasion, cutting, tearing and puncture. The performance of the glove is graded in accordance with four or five performance levels. The end user is then able to select a glove with a performance level profile that suits a particular work activity. So for example, a glove could be performance level 4 for abrasion but level 1 for tearing (in European standards the higher the number, the greater the protection).

Samples are cut from the palm of a glove and rubbed against a 180 grit abrasive paper using a “Martindale” type abrasion machine. The number of cycles for the samples to hole is measured. Four performance levels are defined in EN 388 ranging from level 1 = holing > 100 cycles to Level 4 = holing > 8000 cycles.

Samples are taken from the palm of a glove and the number of cycles to cut through the full thickness of the test sample by a circular rotating blade is recorded. Blade sharpness will vary and is assessed by using the cut test machine to cut through a standard reference fabric. The cut resistance of the glove is based on a relative index that compares the number of cycles to cut through the glove when compared with the standard fabric. Five performance levels are defined in EN 388 ranging from level 1 = Cut index > 1.2 to Level 5 = Cut index > 20.

“Trouser leg” type samples are taken from the palm of a glove and are torn apart using a standard tensile test machine. Four performance levels are defined in EN 388 ranging from level 1 = tear strength > 10N to Level 4 = tear strength > 75N.

Samples are taken from the palm of a glove and the force required to penetrate the sample with a defined stylus using a tensile test machine is measured. Four performance levels are defined in EN 388 ranging from level 1 = Puncture force > 20N to Level 4 = Puncture force > 150N. 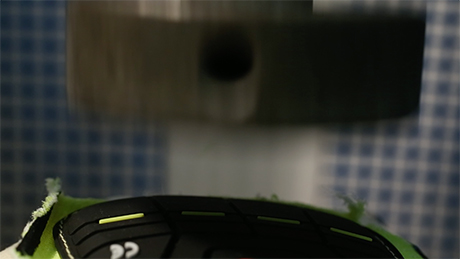 Other than the fingers, each area where impact protection is claimed shall be tested for impact attenuation by measuring the peak transmitted force. To meet the requirements this force must be below a defined value.

Go back Start testing or ask us a question