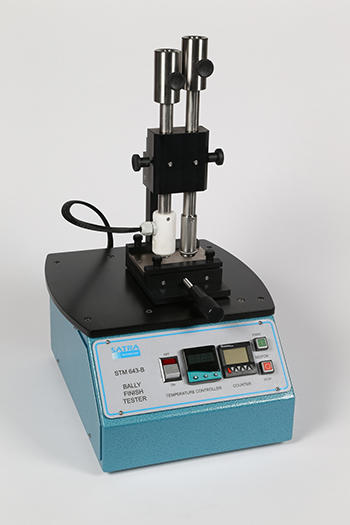 This machine is designed to carry out a rub fastness test on the surface of leather to determine the amount of ‘marring’ of the leather surface or the finish and to assess the amount of colour transfer from the sample to the rubbing pad.

The test can be carried out under dry or wet conditions by using a dry rubbing pad — or pre-wetting the rubbing pad in distilled water or a sweat solution prior to testing. The same machine can also be used to assess the abrasion resistance of insole boards. This test is covered by VESLIC - C4500 and IUP 450.

The testing machine is suitable for a wide range of tests that require a 'to and fro' movement on a material surface. The rubbing element, number of cycles, load and temperature can be adjusted to suit the test material requirements.

This model is a two-station machine (a single-station machine STM 421 is also available) and has the benefit of having one station heated for ironing tests. This test is used to determine the reaction of the leather surface to the application of heat and pressure particularly when experienced during ‘ironing’ but also when associated with the normal lasting process. Thermoplastic-based finishes are particularly susceptible to damage through ironing. The ironing characteristics of the leather can be influenced by the addition of agents in the finish which help them to achieve a leather surface favourable to ironing. A metal foot is provided with the machine to facilitate the ironing process. This test is covered by VESLIC - C4580.

The abrasion effect of soling materials on upper materials can also be tested on this equipment. Using a small profiled rubber pad in place of the felt pad, samples can be tested for this effect. Abrasion of the upper by the soling material can be caused in normal wear particularly when wearers cross their legs and the sole of one foot rests on the upper of the other foot. This test is covered by VESLIC - C4505.

The ability to pre-tension the test sample is a feature of both models. This is particularly useful when testing stretchy leathers and is a requirement of the abrasion test under C4580.

Operation is simple. The sample is placed on the test surface and clamped using the clamps provided. Pre-tensioning can be effected by adjustment of the knob or screw in conjunction with the percentage scale engraved on the testing table. A pre-determining counter is fitted to the machine, causing it to stop when the pre-determined count is reached. The square felt pad (STM 421P) is inserted in the machined holder on the end of the rubbing head which is then lowered to the surface of the test sample and the machine switched on. The material surface and the rubbing pad are inspected visually, in the case of colour transfer, the wool-felt rubbing pad is evaluated using the grey scale provided with each machine.

An initial supply of wool-felt pads is included with the machine.