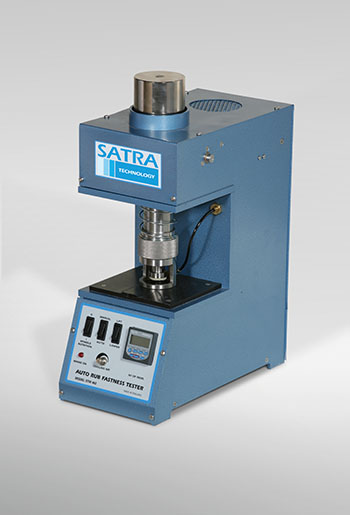 This machine determines the fastness of the finish of a leather upper, leather lining, synthetic upper or lining and fibreboard. Rubbing can be carried out in dry or wet conditions. The latter can be water, solvents in shoe polish, or toe puff (box toe) solvents applied to the back of the material.

Fastness can be judged by the effect on the sample material or the transfer of colour to the rubbing pad. The change in appearance of the finish and the colour transferred to the rubbing pad is assessed by reference to a standard scale.

The machines can also be used for testing the rub/abrasion resistance of inks on printed films under dry or oily conditions.

The machine has a rotating head holding a circular felt pad under a load of either 0.73kg or 2.5kg as required. The rotating head and felt pad can be raised from the sample surface allowing the test specimen to be examined during the course of the test. The counter operates only when the felt pad is in contact with the test specimen. It is a pre-determined counter which can be set to stop the machine when the preset count has been reached.

This machine has all the attributes of the STM 461 but with two additional features.