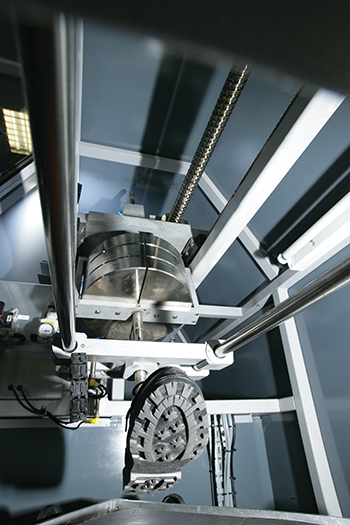 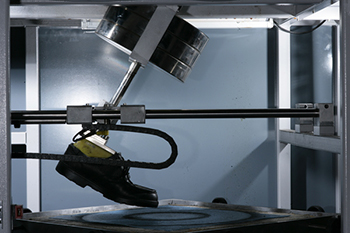 Traditionally, there are two ways to assess the wear resistance of footwear soling. An actual wear trial can be carried out requiring several wearers and several months of actual wear. Alternatively, we can carry out a fairly quick standard abrasion test in the laboratory using a grit paper. Neither of these methods is ideal and can produce conflicting results.

The new biomechanical abrasion tester combines the realism of a service trial with the speed of the laboratory test and overcomes the drawbacks of both. It does this by imposing a true walking action over a real wear surface, with motions, speeds and pressures that reproduce values obtained in biomechanical studies. The surface, a textured concrete slab, is a demanding but real surface. The test program alternates straight steps with turning steps with the sole forepart in contact. The combined action of walking and turning of the wear surface produces results similar to those found in wear trials. A typical test program would consist of 12,000 steps taking about six hours although this can be extended. This test duration produces similar losses to those found in a 30-80 day wear trial. The machine can also be used to investigate the wear of tread pattern elements, integrity of inserts and unusual wear behaviour. It will also condition the surface of a soling prior to slip resistance tests in the worn condition.

The Pedatron has been developed to satisfy the increasing demand to carry out accelerated wear trials. The machine consists of two distinct and separate motions. A processor controlled servo motor operating through a ball screw mechanism drives the leg on which the sample footwear is mounted and a flooring mechanism which rotates and is synchronised with the leg movement. The force applied by the footwear on the sample flooring surface follows a distinct force profile which can be adjusted by the adding or subtracting of weights. The speed of the machine can be adjusted to replicate the action of normal walking through to sprinting.

The machine is supplied with a full control system. Test programs can be set and stored for future use.