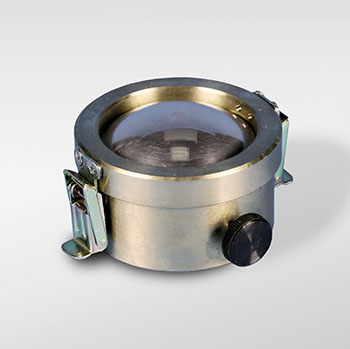 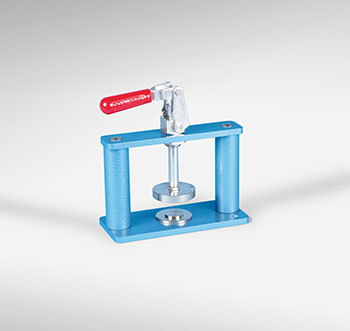 All of the following tests listed that are applicable to toe puffs and stiffeners are SATRA test methods.

Preparation of dome-shaped test pieces from toe puff and stiffener materials for the measurement of area shape retention; and dome strength.

With this method the material is brought into a mouldable condition in the same manner as used in practice. It is then shaped over a spherical dome under pressure using SATRA Ref: STD 153/D and STD 153/P.

The sample is allowed to cool under tension. The strength of the material is its ability to withstand collapse when formed into a three dimensional shape or dome. Thermoplastic materials are usually heated in a fan assisted oven at 95°C for eight minutes raising their temperature to 80°C. Solvent-activated materials are dipped in their appropriate solvent usually for one to two seconds. Fibreboard materials are held in a jet of steam at approximately 50°C for six minutes.

A minimum of 6 dome formers (STD 153D) are recommended to allow the testing of 6 samples at the same time.

Measurement of the area shape retention of formed toe puff and stiffener materials.

When a toe puff or stiffener material is moulded to shape it increases in size. As soon as it is released from the mould some of the area increase is lost and the area loss continues in wear due to mechanical deformations and wetting. The greater the area loss, the poorer the shape and appearance. With stiffeners, the higher the shape retention the better and, after ten collapses, 80-90% is not uncommon.

The area shape retention is determined by measuring the height of the dome at various stages using SATRA Ref: STD 153/H and STD 153/HD.

The area of the dome is directly proportional to the height and since the dome is initially formed to a standard height the area shape retention can be found. This test method is performed in tandem with SATRA TM83 (collapsing load).

Measurement of the collapsing load of formed toe puff and stiffener materials.

This provides a procedure for measuring the strength of toe puff and stiffener materials in a way that corresponds to wear performance conditions. The top of the formed dome is compressed at a constant rate in a tensile testing machine SATRA Ref: STM 566 and STD 153/A - a cylindrical plunger with a level lower surface.

Initially, resistance to compression increases as the dome deforms until a maximum value is reached. After this the test piece collapses and the resistance to deformation falls. The maximum load is reported as the collapsing load: so initial hardness is the load required to produce an initial collapse of the formed dome. This is repeated utilising STD 153/C and, after nine additional collapses, the load to produce the tenth collapse can be determined in the same way as the initial load.

Toe puffs can range in hardness from 180N for military footwear to 10N for fashion shoes with soft upper materials. Toe puff materials require strength to resist the compressive forces due to fall-in. Even a properly heat-set leather upper may retain barely 70% of its original shape.

Resilience provides a measure of the resistance to the small repeated distortions that occur in wear - and the large distortions that are due to accidents or misuse. Most filmic materials have excellent resilience and logically the softest stiffeners are required to have the highest resilience.