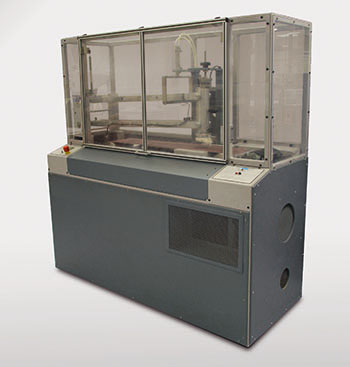 The motorcycle abrasion machine allows an assessment of the initial impact and abrasion that may occur when a motorcyclist is involved in an accident and thrown from their machine. The abrasion of the road on the clothing beingworn is replicated by a continuously-rotating, endless abrasive cloth belt.

Samples can be cut from the vulnerable areas of the motorcycle clothing – typically elbow and knee areas –which are fastened to a detachable sample head. The sample head is mounted on a cantilever mechanism which drops the samples onto the moving belt and exerts a static pressure on the sample of 25kPa. The machine is fitted with a timer mechanism that ensures the time taken to wear (abrade) through the sample is accurately recorded.

The cantilever mechanism and sample head can be moved across the abrasive belt to avoid testing on an already used part of the belt. To keep the belt free from debris during the test a large cylindrical rotating brush is in contact with the belt. A vacuum system fitted to the machine ensures the debris is removed safely.