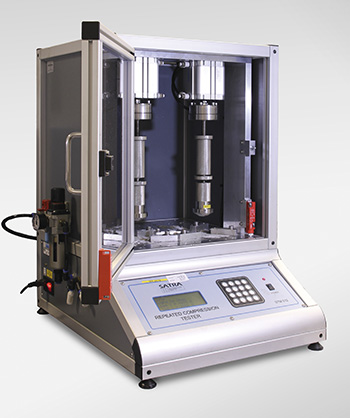 The SATRA STM 512 test machine is a two-station machine, which simulates the forces applied by repeated heel strikes in walking. The machine can test whole shoe constructions or heel components, as well as evaluating sheet materials for midsole use.

The load is applied with a pneumatic plunger via a domed striker to represent the human heel. A standard test is run for 500,000 cycles and the applied load can be varied to replicate the forces attributed to men, women or children, and the strike rate can be increased to accommodate accelerated testing or the assessment of running shoes.

Evaluation of footwear, when using the STM 512 can be in the form of failure due to collapse or splitting. Another characteristic of footwear that can become evident when using the STM 512 is the compression set of the footwear material. Compression set can be seen as the permanent loss of thickness of a material or component measured after a period of recovery following cyclic compression.

The STM 512 can be used to help identify suitable materials for use in the construction of footwear and also used in conjunction with other SATRA test machines to produce ageing prior to other tests being undertaken, for example, shock absorption tests as conducted using SATRA STM 479.