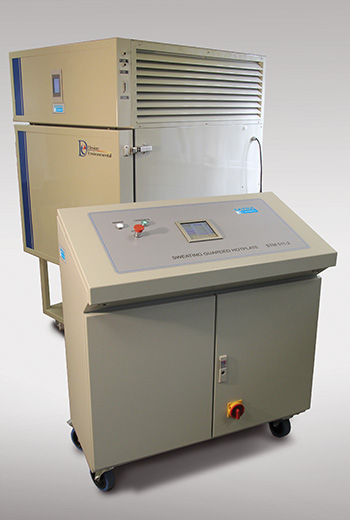 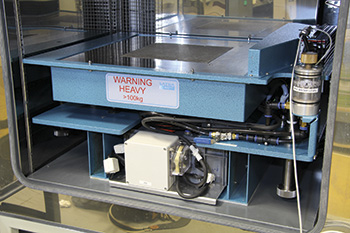 The sweating guarded hotplate (often referred to as the 'skin model') is a device for measuring the Thermal resistance or water vapour resistance of a material or composite.

The test is designed to simulate the transfer processes of heat and moisture through materials next to the human skin and to measure the rate of transfer of heat or moisture in such processes. It is, therefore, particularly relevant for assessing the ability of clothing and footwear materials to transmit moisture or heat, primarily under steady-state ambient conditions.

The test machine comprises an environmental cabinet, which allows the temperature and humidity to be closely controlled, into which is integrated the specific hardware required to conduct the tests.

At the core of the machine is the measuring unit consisting of a porous metal plate attached to a conductive metal block fitted with heating elements. Also contained within the block is a water reservoir fed by a closely-controlled water supply which keeps the water level up to the underside of the porous plate.

The test method detailed in EN 31092/ISO 11092, for example, is a steady-state test suitable for the measurement of thermal resistance and water vapour resistance of fabrics, films, coatings, foams and leather. It is currently the approved method for assessing the performance of breathable and insulating materials for a number of footwear specifications, particularly those used by the military. The test method also has applications in clothing, sleeping bags, upholstery and similar textile type products.