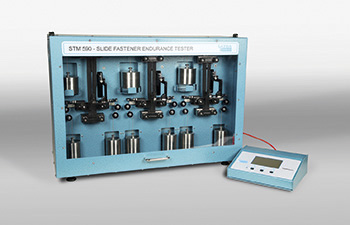 It tests up to three fasteners simultaneously by repeatedly opening and closing them until either the fastener fails or the number of preset cycles is reached.

The zip fastener is held vertically between a lower fixed clamp and an upper loaded clamp. Horizontal loads are applied to the fastener by two horizontal clamps and load masses.