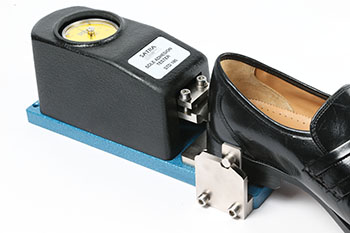 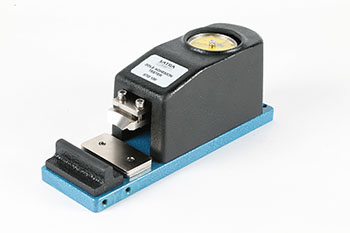 This well-proven instrument is designed to measure the strength of the adhesion of stuck-on and moulded soles at the toe and heel of finished footwear in the shoe factory, but is equally useful in the testing laboratory.

The illustrations show the standard STD 185 with and without the heel attachment STD 185H. The sole of the footwear, still on its last, is positioned on the ridge shaped anvil or fulcrum so that the curved toe piece of the instrument fits in the feather-line groove between the sole and the upper.

A gradually increasing force is applied by hand to the backpart of the footwear and this effectively becomes a downward force applied by the toe piece to separate the sole from the upper. This force is shown by the load dial gauge on the instrument, which incorporates a maximum load pointer.

The actual load to cause separation can be measured or alternatively, a pass load can be applied to check that the sole adhesion is satisfactory and the sole does not come away. This second method of operation is the more useful one in the shoe factory since it can be applied to ordinary shoes from the production line.

If, as should happen, the sole attachment remains secure, the shoes can be returned to the rack or track quite undamaged. If soles pull away before the pass load is reached, a check on materials, technique or process is called for.

The measurement of adhesion at the heel (mainly for men's and industrial footwear) is carried out in a similar way, but the heel is supported in a cradle (STD 185H), which replaces the anvil.