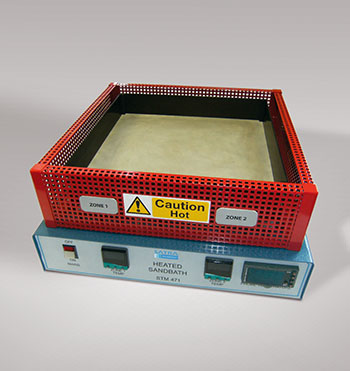 This bath is designed to assess the heat insulating properties through the soles of safety footwear. The apparatus consists of a thermostatically-controlled hot plate covered with sand.

The footwear is placed on the hot plate so that the sand covers the featherline. A separate temperature probe, connected to a digital readout via a plug and socket arrangement, is placed inside the footwear to measure the temperature rise over a specified time.

The sandbath incorporates an illuminated power on/off switch and a temperature controller.

A fitted mesh guard protects the operator from the heat source during testing.