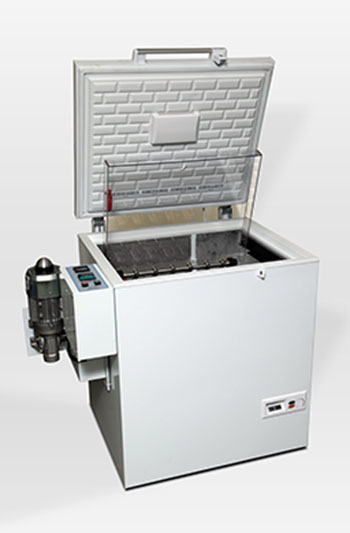 Flexing tests are sometimes required to be carried out at low temperatures. This determines the suitability of materials being tested to flex at temperatures below 0°C. SATRA provides a range of these machines and uses a low temperature cabinet specifically designed to suit the test.

The SATRA low temperature cabinet ensures maximum operator safety by having the electrical control and drive systems outside the freezer area where moisture cannot impair electrical safety. The control system incorporates a digital temperature controller which can be set to achieve the desired temperature from ambient down to -20°C, plus a counter to indicate the number of flexes carried out. The counter can be preset to stop the drive mechanism when completed.

This is an alternative low temperature test to the SATRA vamp flex, frequently referred to as the Bally flex test, and is mentioned in some international standards. It is more severe than the vamp flex test and failure is usually indicated more quickly, however some types of failure are not revealed by the test.

The STM 408F is an eight-station version and is built into the low temperature cabinet.