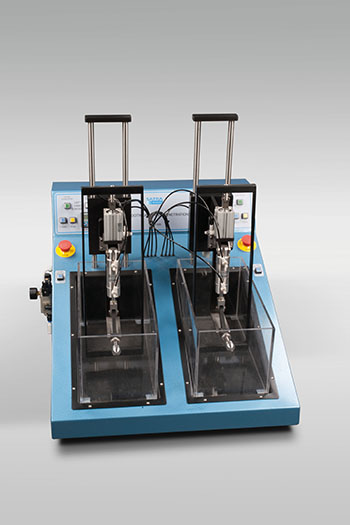 This test machine is rapidly becoming an internationally-accepted standard for laboratory testing of footwear. The results for this test closely follow the standard trough test where the wearer walks in water to assess the resistance of footwear to ingress.

Each station has an independently-controlled air cylinder to raise and lower the footwear in and out of the tank. A pre-determined counter enables the machine to be left unattended. When the pre-set count is reached the footwear will rise out of the water.

This equipment is used on a daily basis in SATRA's state-of-the-art laboratories and is proving to be the most reliable automated test for water resistance testing. It is performed on the whole shoe and tests all aspects of the footwear, including the materials, construction, seams and sole bond.

The same machine can also be used for testing the effect of protective coatings applied to footwear.