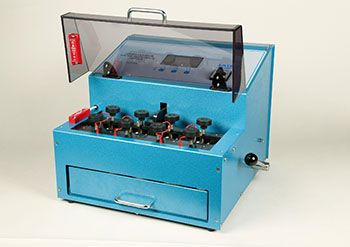 This equipment is designed to test the water resistance of upper leathers (and upper leather substitutes) under conditions of flexing similar to those in the forepart of a shoe during walking.

One clamp is moved/rotated repeatedly through an angle of 32° to form creases in the specimen similar to those produced during walking. A pre-determined totalising counter is fitted.

Rectangular test pieces are folded into a vee shape and held in watertight clamps. A tank containing water is then raised so that the test piece is surrounded by water. One clamp is then moved up and down repeatedly by a driven crank linkage, forming creases in the leather similar to those produced in the shoe vamp. A resettable counter is fitted and the number of flexes before water penetration is observed and recorded as the test result.

The system incorporates an individual counter for each station, plus visual and audible alarms. There is a three-position switch to select one of three sensitivities (10K, 30K and 50K ohms). The individual station counter stops recording when water penetration is first detected and switches on the alarm while the remaining stations continue the test. The machine accommodates four test pieces.